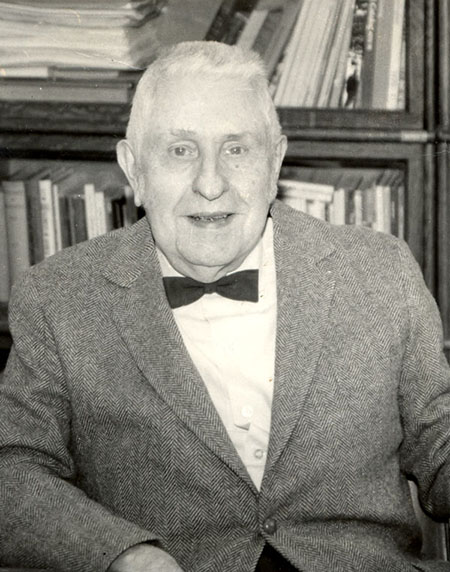 William Allen (Bill) Ferguson, associate professor emeritus in the mathematics department, died at home on August 15, 2004. The cause of death was prostatic cancer. He was involved in the administration of the department from 1947 until his retirement in 1987. He began his administrative duties during the acting headship of Roy Brahana (1947-1948) and continued to serve with distinction under the headship of Stewart Cairns (1948-1958), Mahlon Day (1958-1965), Paul Bateman (1965-1980), and Heini Halberstam (1980-1987). He was appointed to the regular staff in 1946 by Arthur Coble, who was department head from 1933 to 1947. Coble undoubtedly selected Ferguson for administrative duties because of Bill's extensive administrative experience under enemy fire in World War I.

Bill Ferguson was born March 6, 1917 in Roanoke, Missouri. He attended public schools in Roanoke and graduated from Roanoke High School in 1933. He went on to Missouri Valley College, Marshall, Missouri from 1933 to 1937 and received the degree of Bachelor of Arts there in 1937. He then became a graduate student in mathematics at the University of Illinois and received the degree of Master of Arts in 1938. From 1938 to 1941 he continued his graduate studies at the University of Illinois and served as a graduate assistant. From June 1941 to December 1945 he served with the US Army. He returned to graduate work in December 1945 and got his Ph.D. in June 1946. His doctoral thesis was entitled "On the classification of finite metabelian graphs with six generators" and was supervised by Roy Brahana. (It was reviewed by Robert Thrall, a 1937 Ph.D. student of Brahana, in Mathematical Reviews vol. 11(1950), p. 320.) Bill was an instructor here from 1946 to 1948, an assistant professor from 1948 to 1955, and an associate professor from 1955 until his retirement in 1987.

In the army Ferguson served as executive officer of the 326th Engineer Battalion of the 101st Airborne Division, rising to the rank of Major while on active duty. (Later on he retired from the military reserves with the rank of Lieutenant Colonel.) He saw extensive combat action in the Normandy invasion of June 1944, in the airborne invasion of Holland in September 1944, and at Bastogne in the Battle of the Buldge in December 1944. According to the Encyclopedia Brittanica, the 101st Airborne Division's "“stout defens of Bastogne checked the German drive in the Ardennes and contributed to the ultimate German defeat." The acting commander of the 101st Airborne Division was General A.C. McAuliffe, whose Encyclopedia Brittanica biography relates, "His terse reply to a German summons to surrender Bastogne -- 'Nuts' --became a classic of World War II."

During the period when the building now housing the University's Institute of Aviation served as the headquarters of the Champaign Airport, it contained a plaque telling the story of McAuliffe's celebrated reply. While Ferguson did not talk much about the details of his combat duty, I remember his showing that plaque to my daughter thirty or forty years ago with a touch of pride in his voice.

In 1947 Ferguson was placed in charge of freshman and sophomore courses, a responsibility which he was to hold for the next 40 years. In that capacity he not only supervised the graduate assistants but also maintained regular office hours to handle student complaints and requests for section changes. His skill in dealing with students was legendary; he could be tough as nails when necessary, but he treated each student with respect and was very adept in providing a solution that was acceptable to the student and appropriate to the academic situation. For example, Bill was very adroit in dealing with complaints about instructors who did not speak English with an Illinois accent; he would gently point out that there are many different ways of speaking English correctly. He was particularly amused that one of the most vigorous complaints ever received by the department about a "foreign"” accent stemmed from the Oxford accent of the British mathematician Nick Bingham.

A predecessor of Ferguson in the area of departmental administration was Henry Miles, who held the title Executive Secretary of the department from 1947 until his retirement in 1968. Miles' main duties were the supervision and recruitment of graduate students and the semiannual construction of each semester's teaching schedule. After Ferguson joined the regular staff he assisted Miles in the latter endeavor, a job for which he was well qualified because of excellent combinatorial instincts. When Miles retired, his duties with graduate students were assumed by Franz Hohn, while Ferguson inherited the title of Executive Secretary and a large part of the responsibility for teaching schedules. The title of Executive Secretary was originally intended to suggest a function like that of an executive officer under a commanding officer in the Navy. Ferguson found it amusing that some correspondents of the department assumed that the Executive Secretary was a woman. In spite of his military background Bill did not seem to be bothered by the fact that two of his closest co-workers, the graduate advisor Franz Hohn and the department head Paul Bateman, had both been conscientious objectors in World War II.

Beginning in the 1960's the College of Engineering instituted a program of Summer Advance Enrollment for entering freshmen. As a part of their program Ferguson formally counseled thousands of new engineering freshmen regarding their math placement. In a letter of 1986 to Ferguson, Assistant Dean R.W. Bokenkamp of the Engineering College wrote, "While this may have been one of your minor responsibilities, our follow-up studies reveal that your judgment was incredibly accurate and consistent."

In 1967 as department head I wrote the following words in justification of a 12.5% salary raise for Ferguson. "Ferguson is an absolutely superb administrator. Although he does not pretend to be a research mathematician, he is an extremely valuable member of our department team. It would be impossible for me to administer this department without Ferguson's help. In addition to being an expert on administrative machinery, Ferguson is extremely skillful in dealing with people. He is the man in our department who deals with student problems and complaints and has managed to build up a very favorable image of our department in doing so. ... It is very difficult to name a person in our department who is more valuable to the university in its every day operation." I stand by that judgment today.

Ferguson's teaching duties were mostly involved with the actuarial science program. He frequently taught the course on interest and regularly taught the course based on Hall and Knight's Algebra, which for many rears was the basis of the first examination given by the Society of Actuaries. The Hall and Knight book covered many ad hoc algebraic devices; Bill liked to refer to those as applications of Finagle's Theorem. He was very popular with the actuarial science students. On one occasion I substituted for him while he was out of town for several classes of the Hall and Knight course. When he unexpectedly returned one class earlier than planned, the class burst into applause when he entered the classroom.

In addition to his work in the mathematics department Ferguson served on numerous college and campus committees, including the Senate Committee on Athletics and Recreation and the Athletic Association Board of Directors (1967-1981). In the latter capacity he was involved in the hiring of Cecil Coleman and Neale Stoner as athletic directors, the hiring of Gene Bartow and Lou Henson as basketball coaches, and the hiring of Bob Blackman, Gary Moeller, and Mike White as football coaches. He was Faculty Representative to the Big Ten Conference from 1976-1981.

One indication of Ferguson's combinatorial insight was an incident involving the Big Ten basketball schedule that occurred about 35 years ago. The conference basketball coaches wanted a schedule satisfying certain side conditions. The computing consultants employed by the Big Ten Conference reported that constructing such a schedule would be impossible. Bill's combinatorial insight told him that this was an incorrect judgment. Within a week or two he had constructed by hand a schedule meeting the desired side conditions, which was then used for the coming season.

Let me end with a personal note. Bill Ferguson was a very valuable counselor to me during my fifteen years as department head. He contributed many cogent phrases to the department's correspondence, including the line about "not letting the camel get his nose in the tent" when we were confronted with a move by the campus administration to take away some of our office space. On one occasion he gently chided me for losing my temper over a rather trivial matter. He was two years older than me and served as a steadying influence on me throughout. In 1978 he noted that our ages were the twin primes 59 and 61. In 1990 we were pleased when twin primes for our ages occurred again, and were justifiably pessimistic about joint survival until the next possible occurrence in 2020.