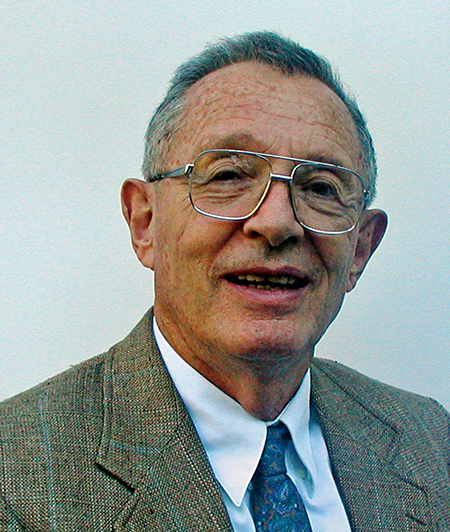 Kenneth I. Appel, 80, of Dover, New Hampshire, and formerly of Urbana, died Friday, April 19, 2013, in Dover after a short hospitalization. He had been diagnosed with esophageal cancer in October. Funeral services were held on April 22 in Dover.

From 1961 to 1993 he was a mathematics professor at the University of Illinois, where he and his colleague Wolfgang Haken solved one of the most famous problems in mathematics, the Four Color Conjecture. They answered this question: Is it true that any map can be colored with just four colors so that contiguous countries have different colors? Their proof that four colors are sufficient, announced in 1976, was the first major mathematical theorem to be proved with the aid of a computer. This solved a problem first posed in 1852 by Francis Guthrie which had been attacked without success by many mathematicians.

Kenneth Ira Appel was born in Brooklyn, NY, on October 8, 1932, and grew up in Queens, NY, the son of Irwin Appel and Lillian Sender Appel. He received a bachelor’s degree in mathematics from Queens College in 1953. After working briefly as an actuary, he served two years in the U.S. Army, at Fort Benning, Georgia, and in Baumholder, Germany.

He received his Ph.D. in mathematics from the University of Michigan in 1959. In Philadelphia that year he married Carole S. Stein. They moved to Princeton, NJ, where Ken worked for the Institute for Defense Analyses, doing research in cryptography.

After joining the University of Illinois at Urbana, he taught mathematics and did research on group theory and computability theory. In the 1980s he served as Associate Chair of the department of mathematics and directed the program in actuarial science. He also served on the Urbana city council and later on the city’s zoning board.

The solution of the four-color problem by Ken Appel and Wolfgang Haken was reported in the press world-wide , including Time Magazine and Scientific American. The New York Times wrote in 1976, "Now the four-color conjecture has been proved by two University of Illinois mathematicians, Kenneth Appel and Wolfgang Haken. They had an invaluable tool that earlier mathematicians lacked--modern computers. Their present proof rests in part on 1,200 hours of computer calculation during which about ten billion logical decisions had to be made. The proof of the four-color conjecture is unlikely to be of applied significance. Nevertheless, what has been accomplished is a major intellectual feat. It gives us an important new insight into the nature of two-dimensional space and of the ways in which such space can be broken into discrete portions." In 1979 the American Mathematical Society and the Mathematical Programming Society awarded the Delbert Ray Fulkerson prize to Appel and Haken. In 2012 Ken was elected a Fellow of the American Mathematical Society.

Ken Appel was passionate about mathematics education, at all levels from elementary school to graduate school. At every stage of his life, he sought opportunities to teach – as a graduate student in Michigan, as a volunteer lecturer at Princeton University, in more than fifty years as a professor, and in retirement as a volunteer in mathematics enrichment programs in Dover and southern Maine public schools. He particularly believed that students should be afforded the opportunity to study mathematics at the level of their ability, even if it is well above their grade level. To that end, he enjoyed working with gifted high school students on the kind of math problems he would give to his graduate students.

He was an avid tennis player until his fifties, a serious swimmer, a lifelong stamp collector, a skillful player of the game of Go, a baker of bread. He was a loving husband, father, and grandfather.

Kenneth Appel is survived by his wife Carole S. Appel, son Andrew W. Appel and his wife Maia Ginsburg, of Princeton, NJ; son Peter H. Appel and his wife Bárbara Zamora-Appel, of Alexandria, VA; by grandchildren Avi and Joseph Appel, Rebecca and Nathaniel Weir, and Carmen Appel; and his sister Lois Green and her children. Carole and Ken’s daughter Laurel F. Appel, a biologist at Wesleyan University, died on March 4 this year at the age of 50 and is survived by her husband, Michael P. Weir.

Contributions in Kenneth Appel’s memory can be made to the Laurel F. Appel Fund for Student Research, Wesleyan University, c/o M. Herlihy, 318 High St., Middletown, CT 06459, or at give.Wesleyan.edu, specifying that the gift is for the Laurel Appel fund.