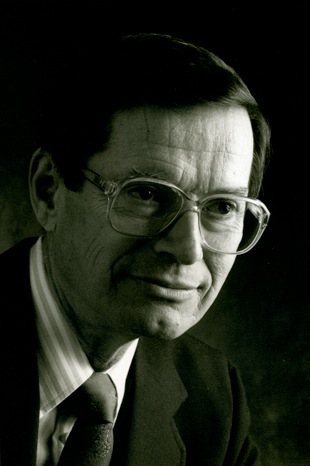 Donald Lyman Burkholder, a renowned mathematician who helped to revolutionize interdisciplinary studies in the areas of probability theory and analysis and who spent his entire career as a professor at the University of Illinois, died in his sleep on Sunday, April 14, 2013, in Urbana, Illinois. He was 86.

He was born January 19, 1927, in Octavia, Nebraska, the fourth of five children of Elmer and Susan (Rothrock) Burkholder. His mother had been a schoolteacher, and his father was a farmer who served on the community school board for many years. Education became the family business: of the four boys, the oldest was a superintendent of schools, the three youngest were college professors, and many in the next generation are educators.

In 1945, Don graduated from high school, where he was captain of the basketball team and senior class president, an honor (as he loved to relate) that came his way because his three classmates had all been president already. He was drafted and entered the Civilian Public Service as a conscientious objector, serving as a cook at a camp for fighting forest fires in Oregon and as an orderly at a mental hospital in New Jersey.

Following his discharge in December, 1946, he acted on the recommendation of a friend and enrolled at Earlham College, a predominantly Quaker college in Richmond, Indiana. There he met his wife-to-be, Jean Annette Fox, and they were both drawn to the field of sociology by the vision and intellectual rigor of a new faculty member who had also served in the CPS, Bill Fuson.

Soon after he came to Illinois, Don, influenced by his eminent colleague Joseph Doob, turned to the study of martingales and their connections to other areas of mathematics. The term martingale is used in the discipline of probability to describe a fair gambling game, in which the fortunes of the gambler and the house are equally weighted. It is a matter of balance. As Don liked to point out, the study of martingales is like studying certain properties of Alexander Calder’s mobiles, artworks whose parts hang in perfect balance.

It is now widely recognized that the concept of balance embodied in martingales is central for a large number of objects in mathematical fields seemingly unconnected to probability. Don’s research, including a fruitful set of papers with his collaborator Richard Gundy, profoundly advanced martingale theory and drove a revolution in the last third of the twentieth century that elevated probability theory to a major role in the study of analysis and differential equations.

In his five-decade career, Don gave several hundred invited lectures and lecture series in England, France, Germany, Switzerland, Israel, Denmark, Sweden, Poland, Hungary, Japan, Singapore, Italy, Scotland, Spain, and Canada and at universities across the United States. He was editor of the Annals of Mathematical Statistics (1964-67), president of the Institute of Mathematical Statistics, a leading international society (1975-76), and a member of many councils, advisory committees, and governing boards. He was a dedicated teacher and mentored 19 Ph.D. students.

In his early years at the University of Illinois, Don was deeply influenced by his close colleague Joseph Doob. Half a century later, Don’s last major effort as a mathematician was to edit a volume of mathematical articles in memory of Prof. Doob, which appeared in 2006. Subsequently Don’s colleagues honored him in turn with a collection of his major articles (2011) and a volume of mathematical articles in his honor (2012). Don was devoted to positive social change. During one summer in college, he volunteered in a community group advocating housing desegregation in Chicago while earning money in the Chicago steel mills, laying bricks in the furnaces. He worked for civil rights with the Fellowship of Reconciliation, founded by Bayard Rustin. Throughout his life, he contributed to organizations and political candidates who championed social justice, equal opportunity, and lifting individuals and communities at home and abroad out of the ravages of poverty. He shared these interests with his wife Jean, who has been active in the Urbana-Champaign community, working with the League of Women Voters and other organizations on housing, integration, urban planning, neighborhood preservation, and education, including service as the first chair of the Urbana Human Relations Commission and twenty-two years on the Urbana School Board.

Donations are welcomed for the Kathleen L. Burkholder Graduate Student Award Fund at the University of Illinois Foundation or for the Friends of the Urbana Free Library.