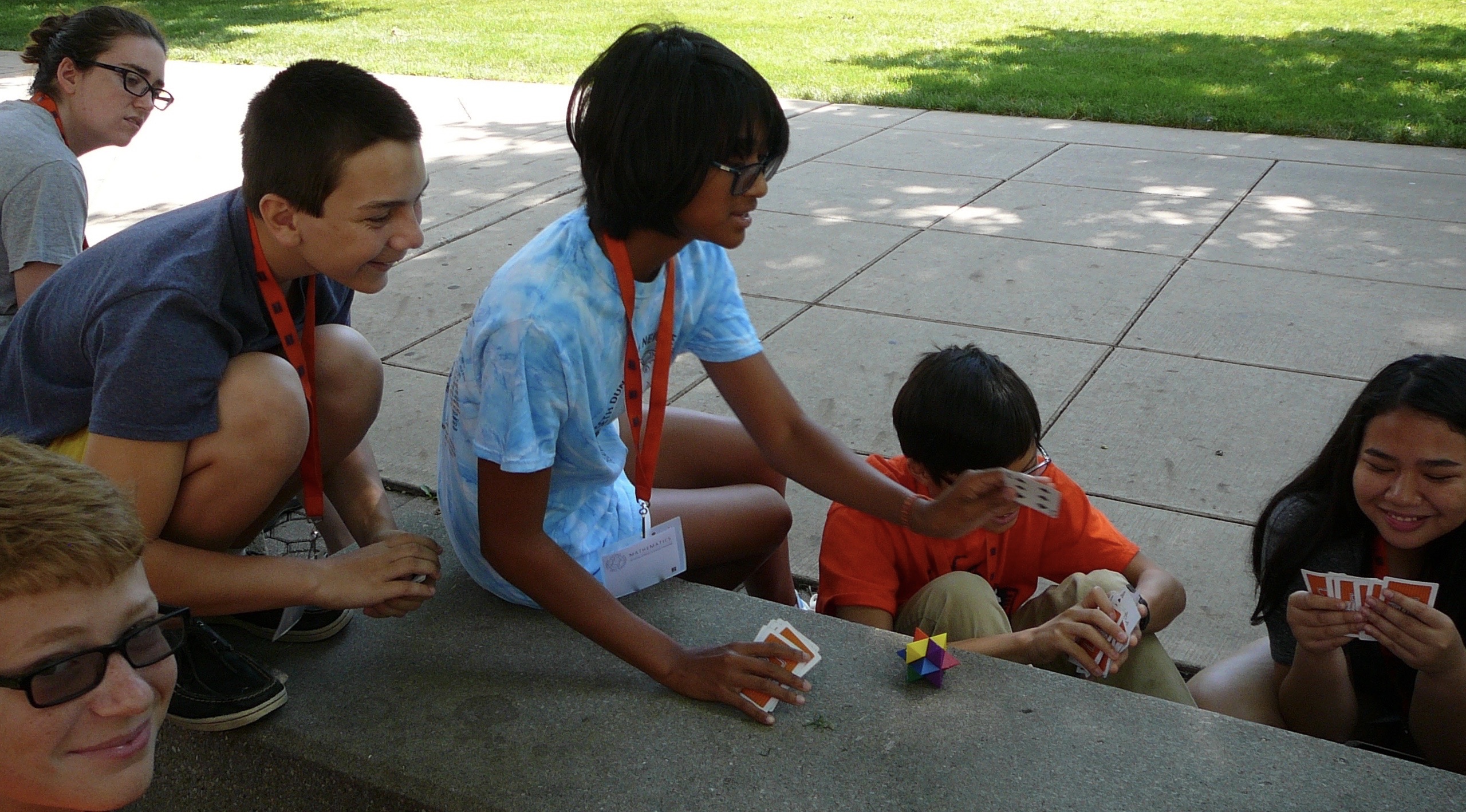 SIM Camp Epsilon is for rising 8th or 9th grade students who will begin geometry or algebra in the fall. It took place July 18th -22nd, 2016.

NOT YOUR CHILDHOOD TIC-TAC-TOE: LOW DIMENSIONAL TOPOLOGY AND GAMES

Campers explored possible shapes of a two dimensional universe, with a strong focus on the topology of the torus, sphere, and Klein bottle. They played connect four on a cylinder, tic-tac-toe on the torus, and tag with the non-oriented Klein bottle. Campers discovered the theory of games, asking questions like “how many first moves are there in torus tic-tac-toe?” or “does the ‘it’ player have an unfair advantage in Klein bottle tag?”

Campers learned how to write and read secret messages using modular arithmetic or “clock math,” and got a look at how information is kept private on the internet. We practiced sending each other messages with each method, as well as answer questions like “how can you read a message without knowing the code?” and “how can you share a code without other people being able to read the message?” 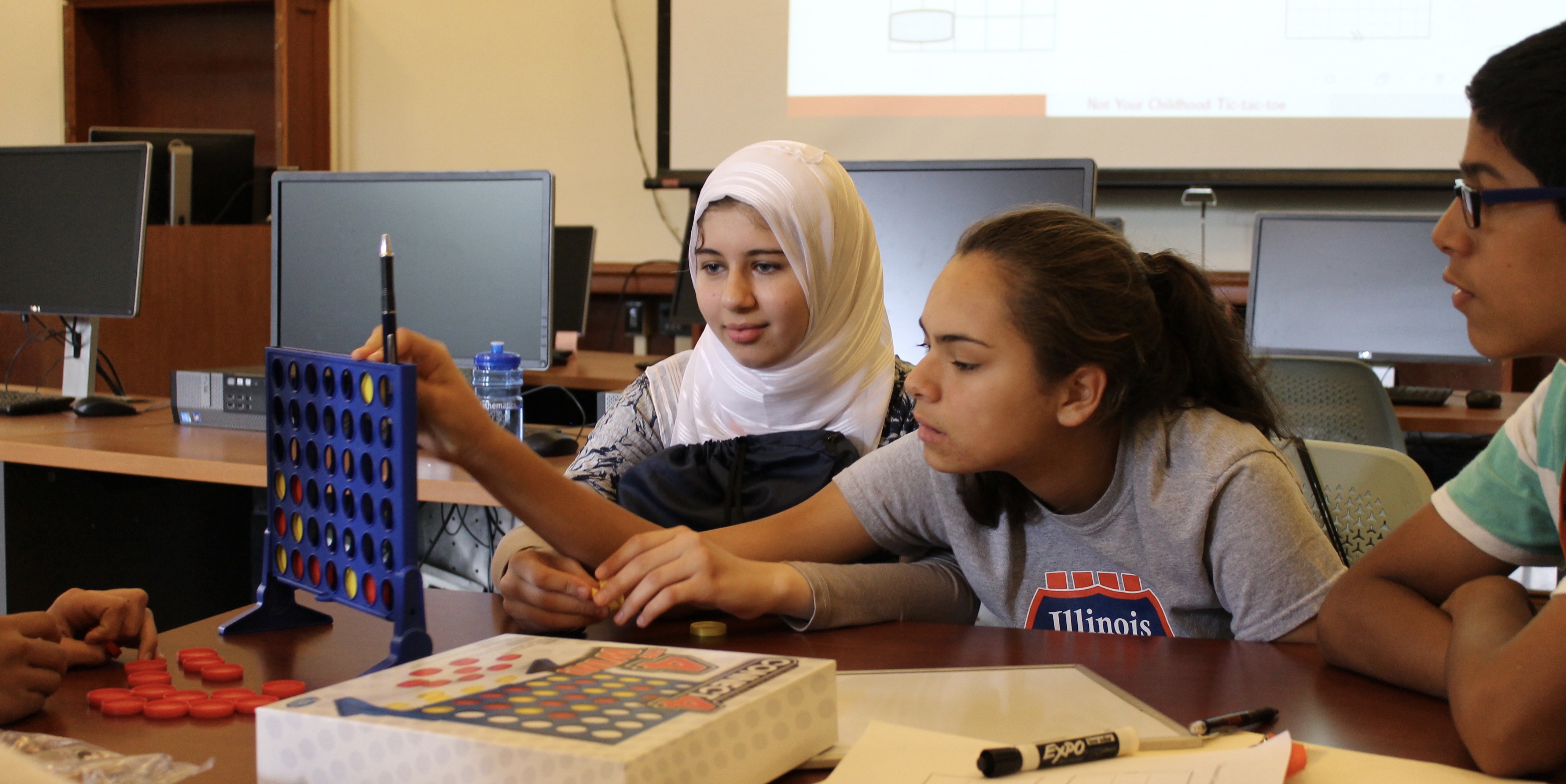 SIM Camp Delta is for rising 9th through 12th grade students who have taken at least a year of algebra. It took place July 25-29, 2016.

WHEN A STRAIGHT LINE CURVES: THE GEOMETRIES OF SPACE

Campers explored questions such as, “What happens when the angles of a triangle no longer sum to 180 degrees?” or “what does it mean to be a straight line?” Campers imagined living in hyperbolic or spherical space, discovering for themselves the challenges presented by these unfamiliar geometries. By the end of the week, campers understood tilings and created their own hyperbolic and spherical art to take home.

From diseases to biological networks, we can use mathematics to create “models” to describe how systems behave over time. Mathematical Biology focuses on translating “real life” problems into mathematical structures we can analyze. Campers explored questions such as “How can you construct a model?”, “What makes a model accurate?” and “Can we apply it to different situations?” We provided an overview of common types of models used in disciplines such as biology and social sciences. Campers learned how to represent and analyze these using equations, graphs, and computer software. 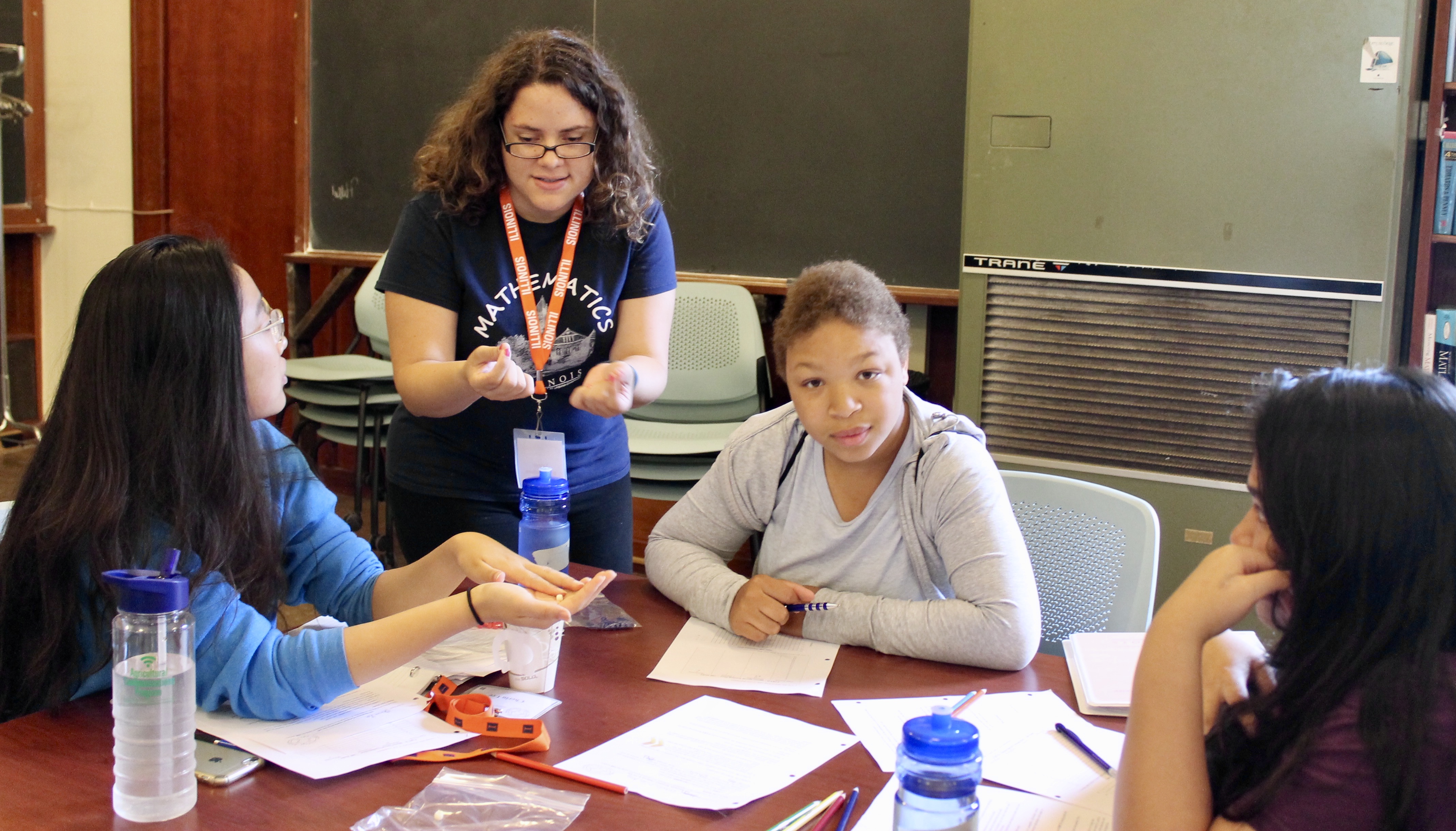 Claire Merriman is the director of SIM Camp.

Melinda Lanius was an assistant director at SIM Camp for 2016.

Simone Sisneros-Thiry is the program coordinator for the 2016 SIM Camp. She is a graduate student in the department of mathematics.

Jennifer McNeilly is the faculty organizer at SIM Camp. She has been Director of the Math Merit Program for Emerging Scholars since 2001. She has won multiple teaching awards, primarily teaching courses at the precalculus level. She is also an advisor to the math majors in the secondary education program.

Claire Merriman ran the cryptography course at SIM Camp Epsilon in 2016. She is a graduate student in mathematics, interested in ergodic theory and number theory.

Vanessa Rivera Quiñones ran the mathematical biology course at SIM Camp Delta. She is a graduate student in the department of mathematics, interested in adaptive dynamics and differential equations

Michelle Seat was teaching assistant for the cryptology and mathematical biology courses. She graduated from U of I in 2017 with a major in mathematics and a minor in Secondary Education. She is now a masters student at U of I in Curriculum and Instruction with a focus in Mathematics, Science and Engineering education.

Hannah Burson was a teaching assistant for the cryptology course. She is a graduate student in the department of mathematics, studying number theory.

Elizabeth Field was a teaching assistant for the mathematical biology course. She is a graduate student in the department of mathematics interested in geometric group theory and combinatorics.

Tina Jordahl was a teaching assistant for the topological games course during Camp Epsilon and the non-Euclidean geometry course during Camp Delta. She graduated from U of I in 2017 with a major in mathematics and a minor in Secondary Education, and is now a math teacher at Champaign Central High School.

Gerardo Diaz will be serving as a teaching assistant for the topological games course during Camp Epsilon and the non-Euclidean geometry course during Camp Delta. He graduated from U of I in 2017 with a major in atmospheric sciences, and is now a masters student in geoscience at Western Kentucky University.

Jeremy Tyson is the faculty sponsor for the 2016 SIM Camp. He is a Professor in the University of Illinois at Urbana-Champaign Department of Mathematics and director of the Illinois Geometry Lab .

Support was provided by: